Wish you were here?

Here's two good reasons to wish that you were in Tulsa, Oklahoma today:

Those are also the first two items on my thankful list, here's the last one:

3. I didn't have to work today, so I got to enjoy the beautiful weather.
Posted by Knit and fall back in it at 8:11 PM 18 comments:

When the going gets tough...

The tough go shopping. And that's what I did today...all day. A little retail therapy will cure what ails ya, I'm here to tell ya.

It started at Coldwater Creek, it was a big Fall sale, I had to go in a look, didn't I? And look I did. I walked out of there with 2 sweaters, 2 shells, 1 blouse, and a necklace. Then I wandered down to Chicos Holy cow!!! It was another Fall sale. 2 more blouses, 2 pairs of pants, 1 pair of earrings and another necklace. At JC Penney they were calling it a grand opening sale, which I don't really understand, but I bought a pair of shoes anyway. Then, and you'll never believe this, but Famous Footwear was having a Fall sale, so I got another pair of shoes and 4 pairs of socks. While I was in Claire's I was advised by the ever so helpful sales staff that it was a buy 2 get 1 free on all of their earrings, so I picked up 3 more pairs of earrings there. My last stop was FYE where I bought a Kid Rock CD. And that was pretty much all I got done today.

I took a break this summer from my knitting (not to mention a short break from reality) but I'm feeling much better now!

Sue started a mitered square project using left over bits of sock yarn and I just had to try it myself. I started playing around with the odds and ends of sock yarn that I had left over, I knew I would never have enough to make a throw of any size but I was having fun playing in the wool. Mom donated her left over sock yarn and it got a little more interesting. Sue and Emma donated some more bits and pieces and that's when it started becoming an addiction. Sadly, I didn't take a picture of the yarn that they contributed, but that doesn't mean that I didn't love every bit of it. This project wouldn't have gotten very far without it, thanks to both of you.

I mentioned this project to Julie who said that she had some leftovers that she could part with and she sent me this: 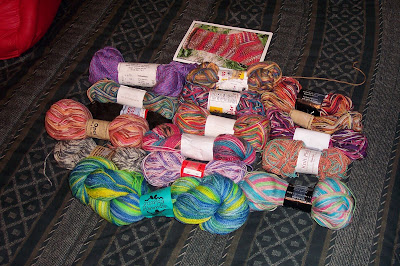 That is what's left after 15 pairs of socks PLUS a brand new skein of Spunky Ecclectic and a very nice card...just because. Thank you so much, Julie. I don't deserve you.

So anyhoo, this project has taken on a life of it's own. I can't seem to put it down. This picture was taken a few days ago, at that time I had completed 91 squares. 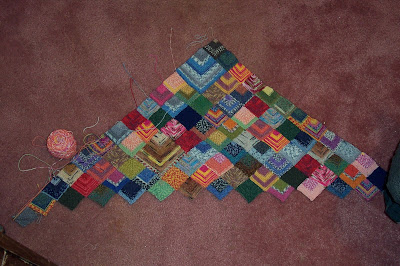 You can click on the pictures to get a better look. I love how all of the crazy colors and patterns look like they belong together, even though they don't. When you start a square you don't know how it's going to turn out until it's done and that's what makes this project so hard to put down.

I'm still thankful:
1. I'm thankful for all of the prayers and good thoughts and nice comments and emails I have received over that last several weeks.

2. I'm thankful for the last 14 years, regardless of the ending.

3. I'm thankful for leftover sock yarn to occupy my time.
Posted by Knit and fall back in it at 4:24 AM 14 comments:

The knit has hit the fan!

Things are out of control around the knit house these days. I need to step back and take deep breath, so there won't be much going on here for a little bit. I'll still be visiting your blogs so that we can keep in touch.

If you have a minute, you might say a prayer for the residents of the knit house, both current and former.
Posted by Knit and fall back in it at 6:29 AM 19 comments:

It seems I started something over on Buck's blog when I made a comment about chubby legs that then bled over onto Becky's blog. So I feel obligated to participate.

Check out these gams...stems...pins...getaway sticks: 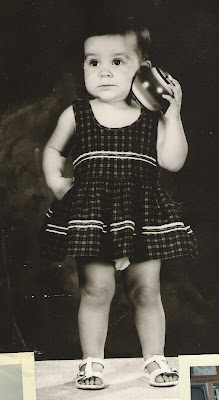 This picture was taken in May 1967 - and you'll have to do the math yourself.

While I was looking for the chubby-legged picture I came across another picture that I have always found odd: 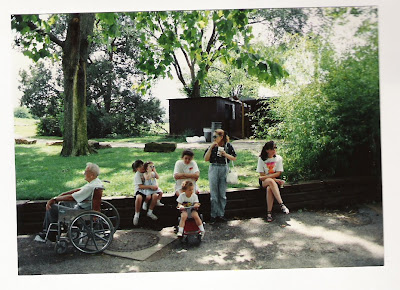 To the far left is my granddad Omer, then my daughter Kate holding her cousin Leslie, my sister Penny behind the stroller, in the stroller is a family friend Trenton, then my mother Joyce, and me on the far right. This picture seems odd to me because, while we have always been a pretty close-knit family, we look like a bunch of strangers in this picture. No two are looking at each other, or even in the same direction. We're not talking or posing. And I don't even know who took it, I'm assuming it was my dad but I don't even remember it being taken. Judging from the ages of the children and my hairstyle, I would say that this was taken around 1993.

I woke early this morning, about 6:ooam-ish, we watched a little news and had some waffles and a little coffee, things were going well, we were going about starting our Saturday. Then, the clutz that I am, was attempting to walk and carry things in my hands and talk at the same time. I may have even been trying to chew gum, I don't know, but a series of unfortunate events resulted in a US 7 (4.5mm) bamboo knitting needle getting stuck (about 2" of it) in my left heel.

Here's how the conversation went:

He leaves the room and comes back with some pliers.

Robert: (grasping the knitting needle with the pliers) This is not a good idea, we should go to the ER...are you ready?
Amy: (takes a deep breath) Yes

Robert holds Amy's feet higher than her head, at the same time applying pressure to the wound on her foot. After a few minutes the nausea subsides and the color returns to Amy's face.

Robert: Are you OK?
Amy: Yeah, thank you.
Robert: I peed a little bit.

Now I've seen it all

Have you guys seen this? Snoop Dogg and Willie? And if I know my cute boys (and I think I do) I would say that is Brad Paisley in the reddish hoodie and ball cap playing lead guitar.

What a strange collaboration. Willie is 75 years old, shouldn't he really consider settling down a little? Seriously, just a itty-bitty-tiny-little bit. What are they talking about anyway? Medicine?? I don't get it.

P.S. When I went to Brad Paisley's website to get the link I found a video there with him and Andy Griffith.(!) Holy smokes, has the world gone crazy?
Posted by Knit and fall back in it at 6:59 PM 10 comments:

We're dealing with a lot of stuff here!

I have seriously neglected blogging, both reading and posting, but I've been (as a very wise person once said) up to my @$$ in alligators around here. It's been a very busy summer so far.

There have been birthday celebrations: And one for my country.

There were ballgames to win: There have been moderately successful attempts at staying cool in the Oklahoma heat: There has been yardwork and wildlife to deal with: Some soft and cuddly. There were some more acts of kindness: Ann from my knitting group made this hat for Dona. Thanks again, Ann. I have sent it off to Dona and I know that she will love it.

There has also been a (very) little bit of knitting: This is another square for the Holly B and Tracy B blankie project. I loved that pattern, it was so quick and fun and easy that I decided that I would use some of the DK weight cotton I had sitting around here and size 3 needles and use the same pattern to make a pretty face cloth. However, that attempt did not go as smoothly as my first attempt at this pattern. It ended badly.

And there was this: It may or may not become a finished object, we'll just have to wait and see how it goes. I took that picture in the house and those colors are not even close to the actual colors. Maybe if it becomes a finished object I will try harder to get a better picture of it.

Then there were some other things that weren't worthy of being photographed, like trying to get our house ready to put on the market so we can move back into Tulsa. I have decided that I am tired of working here for myself...by myself and I am trying to decide if I want to go back to work in a normal job or go to back to school, and doing what needs to be done in order to do one or the other. If there were pictures of these things, they would look a lot like me pulling my hair out. I've never been good at life-changing decisions.

Let's see if I remember how to be thankful:
1. I'm thankful to have so many career and housing options open to me.
2. I am thankful that Robert hasn't strangled me during this life-changing decision making process. Bless his heart. He's a saint.
3. I am thankful he won't be going back to Iraq in September.
Posted by Knit and fall back in it at 7:47 PM 14 comments:

This one goes out to the one I love

I am so lucky to be his wife. He is my rock, he's my soft place to land, he is my friend, he's got my back. **He's a cowboy wrapped in a genius, wrapped in a dream, wrapped in another cowboy**

Happy birthday baby, this one will be better than the last one, I promise.

**That was a line from the tv show "Frasier" the person that said it was talking about Dr. Phil.
Posted by Knit and fall back in it at 8:29 AM 12 comments:

Quote of the day

Knit and fall back in it
Tulsa Area, Oklahoma, United States
I am a 40-something mom who is trying to fill her empty nest with wool, alpaca, llama and bamboo. It's just me, a lazy dog and all of the yarn I can cram into my house. It's a good life. It's a boring life. Boring is good.

Friends from Knitnight at the library